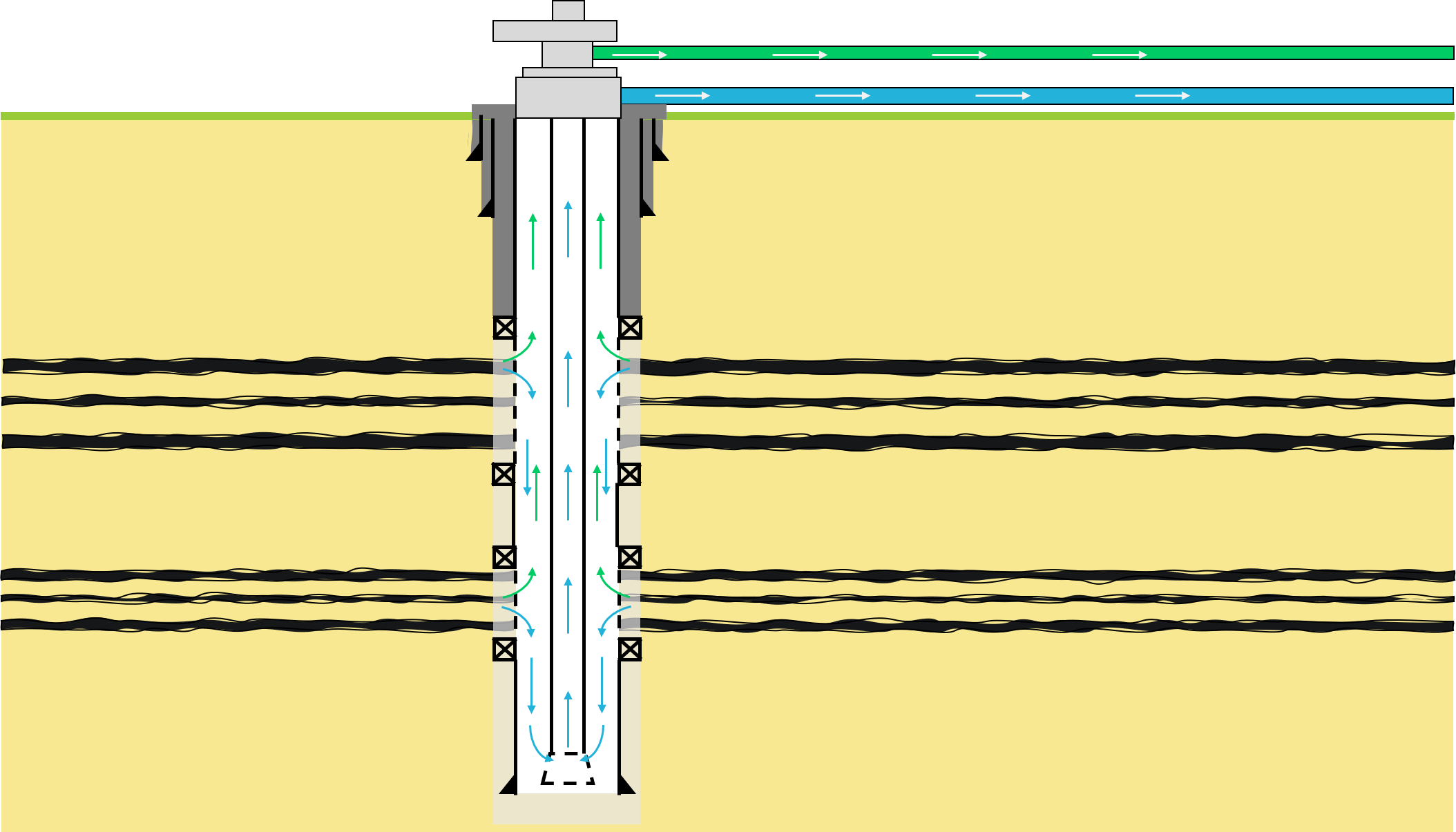 The oil and gas industry (like many others) has a lot of industry specific terminology. In many cases, this terminology is specific to the region and/or type of reserves being developed. AlphaTally is an auto-design tool producing the tallies describing the order of parts in the casing string. In this article, we will go into the basic principles and the nuances of the key parts of a casing string, particularly the key functionalities of casing joints, swellable packers, slotted/perforated liners and the ACP / stage tool. We hope this can provide insight into the workings of coals seam gas wells and the associated jargon for anyone who might be interested, regardless of background.

In the oil and gas industry, a completion is the assembly of equipment downhole designed to let the well begin producing, after all the drilling operations have been performed. In coal seam gas, open hole slotted liner completion (OHSL) is a popular choice.

An OHSL completion is characterized by the slotted liner, which extends beneath the bottom of the production casing, where the reservoir fluids flow in to be produced. A packer is placed above the slotted liner, which hydraulically isolates the region above it, preventing wellbore fluids from rising into the annulus and allowing cement to be pumped in. This packer is the annular casing packer (ACP). The slotted liner sits in the open hole, exposed to the formation and allowing production of its fluids.

A simplified diagram for an OHSL completion in coal seam gas is shown below, and in the following sections the major components of this completion types are discussed.

A well’s casing is a large metal pipe which fits to the edge of the drilled hole. This metal pipe is then cemented to the rock formation, in order to seal it. Typically, multiple holes and their associated casing, of differing diameters, are drilled and placed concentrically in order to stabilize the wellbore. Primarily, the functions of casing are as follows:

Tubing consists of the same makeup as casing; however, its implementation is slightly different. Tubing is the smallest of the casing strings. Tubing can often sit wholly inside of a larger casing string; however, it can also be exposed to the formation. As the smallest pipe in the concentric layout, tubing is generally the conduit through which the reservoir fluids are brought to surface. The concentric layout described can be seen in the diagram above, in the first section of the article.

Generally, packers are devices which are used to isolate different sections of the annular space between the tubing and the casing. However, they can be used for a variety of purposes, including but not limited to:

The placement of packers can be best explained visually, universally represented as boxes with crosses in them. In the earlier diagram, we can see how they fit between the casing and tubing, isolating the annular space below them from the annular space above them.

As with other oil and gas operations, packers are extensively used in coal seam gas. Generally, swellable packers are used in coal seam gas, due to the lower pressures handled when compared to other types of developments. In essence, swellable packers consist of a rubber element which absorbs wellbore fluids, through a process of osmosis, causing it to swell. This swelling can be dependent on the type of fluid that causes it to swell and the composition of said fluid. However, after swelling the packer will be tightly pressed against the walls of the casing, creating a hydraulic seal. One of the upsides of swellable packers is the simplicity of design and the lack of complicated mechanical parts.

The central isolation element may be referred to either as an Annular Casing Packer (ACP) or External Casing Packer (ECP). However, these two assemblies are essentially the same. These assemblies serve to isolate the wellbore fluids from any potential aquifers outside the production casing string. By preventing upwards flow of wellbore fluids, if there were to be any leak from the annulus, no wellbore fluids would be there to contaminate any ground water sources. The central isolation element assembly also allows cement to be pumped above it, further ensuring the integrity and isolation of the well. Thus, these assemblies are critical for the safety of the well.

Mechanically, these assemblies consist of the following parts, from shallowest depth set to deepest: ACP pup joint, float collar, stage tool, ACP. The functions of each of these parts within the respective role of the assembly is outside the scope of this article.

As the name suggests, slotted or pre-perforated liners are parts of the tubing string which are ran with holes already drilled into them. These holes allow for production of wellbore fluids. Traditionally, solid tubing was run down and small explosives were used to perforate the desired sections. However, this was found to be less suitable in coal seam gas developments, due to the efficiencies of installing a part that has already been perforated in the factory and the greater onus placed on surface area exposed . As a result, the majority of coal seam gas developments utilize pre-perforated completions (fracked completions are used where the coal permeability is not sufficiently high).

When designing a well, the rathole is a length of extra hole drilled, deeper than is needed for the development. Thus, the rathole does not have anything purposefully placed in it. The rathole exists below the float shoe, the deepest point of a casing string.

The purpose of the rathole is to allow extra space at the bottom of the well to enhance the performance of other equipment. For example, the rathole allows logging tools to be ran past the final depth of any zone of interest. As the logging tools have length themselves, this allows them to log across the entire interval of interest. Furthermore, the rathole provides space for debris from the well to fall and gather without impeding on installed equipment, such as an electric submersible pump (ESP), which may be clogged by debris around it. The rathole provides available space for any tools or sensors desired at the bottom of the well.

Enjoyed what you read?
Why not reach out for a chat?